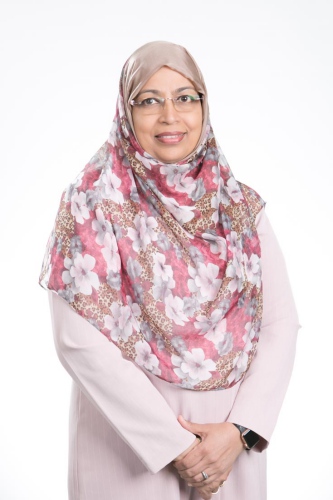 Board Certification and Affiliation

Dr Hashmet Parveen first came to Brunei in 1974 whilst her father, Dr Hj Mir Ghulam Ghouse, was working as a General Surgeon in the Ministry of Health, Brunei Darussalam. Her husband, Dr Syed Harun Habibullah, is an Anesthetist currently employed at RIPAS Hospital. Alhamdulillah, both lived in the country for more than 15 years and educated all their four kids in Brunei. From being a General Practitioner for 17 years, she moved to being academic and researcher for six years and has found both fields enriching and challenging. Her most satisfying role is in contributing to the writing and coordinating to the writing and coordinating of the MRCGP Int exams every year in Universiti Brunei Darussalam. She is also a good cook and loves painting.

Alhamdulillah, she is the:

• Recipient of the SNB (Darjah Empat) from His Majesty in 2010
•​ Recipient of St George’s University of London, College Prize for Distinction Pass in the Postgraduate Diploma in Primary Health Care (PG DIP PHC) in 2004